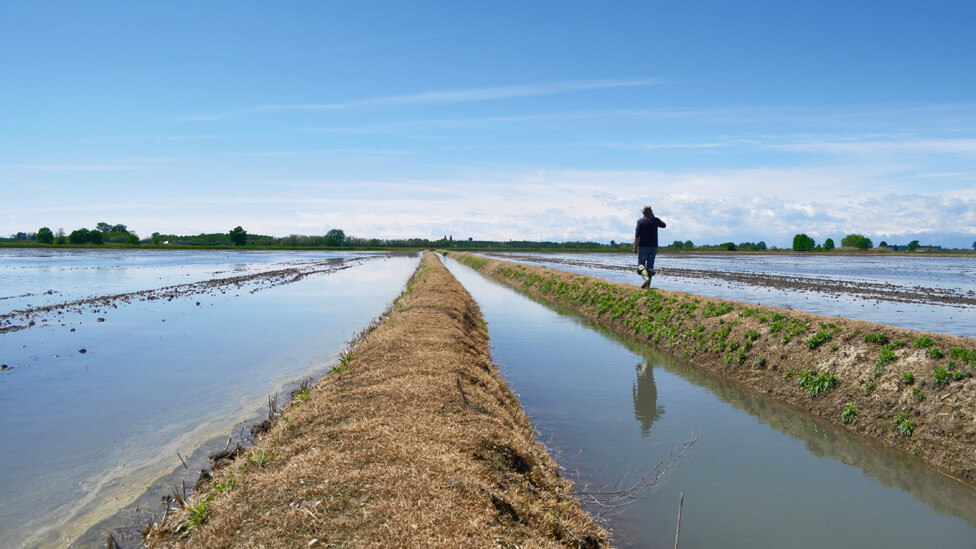 A journey in space and time through centuries of tradition and history.

Razza77 sprouts today on the territory of Novara, a little border of land between Piedmont and Lombardy devoted for centuries to rice-growing. Really this territory saw Razza77 become necessary for decades - from the 50s until the 70s - on the tables of the countrymen for Sunday dinner and in the markets of Novara.

Today we want to bring back Razza77 to the same tables as an ambassador for the rice-growing territory of Novara, to show the beauties of a landscape shaped for centuries by man and in which the seasons are measured by the delicate balance between paddy-fields, land and sky 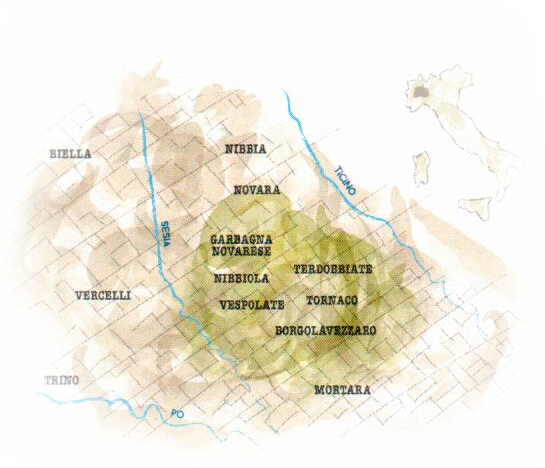 The communal territories where Razza77 is cultivated

We do not limit ourselves exclusively to the cultivation and transformation of the rice, but we are active protagonists in the promotion of the territory and of the local rustic culture. The identity of Razza77 found its roots in the rice-growing tradition of Novara, is to be appreciated and to protected. We are convinced that our origins represent an important value on which to build our future.

Oreste Bordiga tells about his work in rice cultivation, citing a document of 1498: "Proof of the spread of rice cultivation in Italy after 1450 is that after this period around Novara and Lombardy excavation of the important canals took place, (with a delay in 1480), which until the opening of the canal Cavour, was the main base of the irrigation system of the above-mentioned regions. Moreover the first legislative dispositions regarding rice and among them she is a law made in 1498 by Duke Lodovico the Moor, which talks about workers tending to the husking of the rice in the Novara area”.

In 1720 the area to the South of Novara, identified as the Vespolate squad - third and fourth squad “de sotto” in the time of Carlo V (1500-1558), including the Garbagna - Nibbiola- Vespolate - Borgolavezzaro - Terdobbiate - Tornaco territories - was the main producer of rice with a net yield of 870 kg per hectare.

The rice-growers of the zone soon increased the amount of rice-fields so much that 850 hectares of cultivated surface in 1723 (7,7 % of the territory) went on to 4060 hectares (36,9 % of the territory) in 1826. The rice production for hectare increased constantly at the time, indicating a constant improvement of agricultural techniques.

The shortage of water due to the increase of the cultivation was resolved with the excavation of the Cavour canal (1863-1866) and the Quinto Sella (1870-1874). Increase in production was achieved by seed selection thus obtaining more productive and resistant rice races. A “biological revolution” took place guided by yokels and un-educated farmers without the help from an official body (Novara plain, Chamber of Commerce, Industry, Crafts and Agriculture – Novara, 1981).

This territory has had a continuous connection with rice-growing over the years which has shaped the landscape, telling a history through immaterial and material culture. In many rice farms there were machines to process the rice; in Cascina Caccia of Borgolavezzaro a simple grolla (the grolla is a millstone that being adjustable in height allowed the whitening of the rice without crushing it as millstones tend to do) from 1800 is still preserved with all the gears to activate it. In the same farm is a large dormitory for the rice planters (mondine)and the infirmary and chapel has been kept. 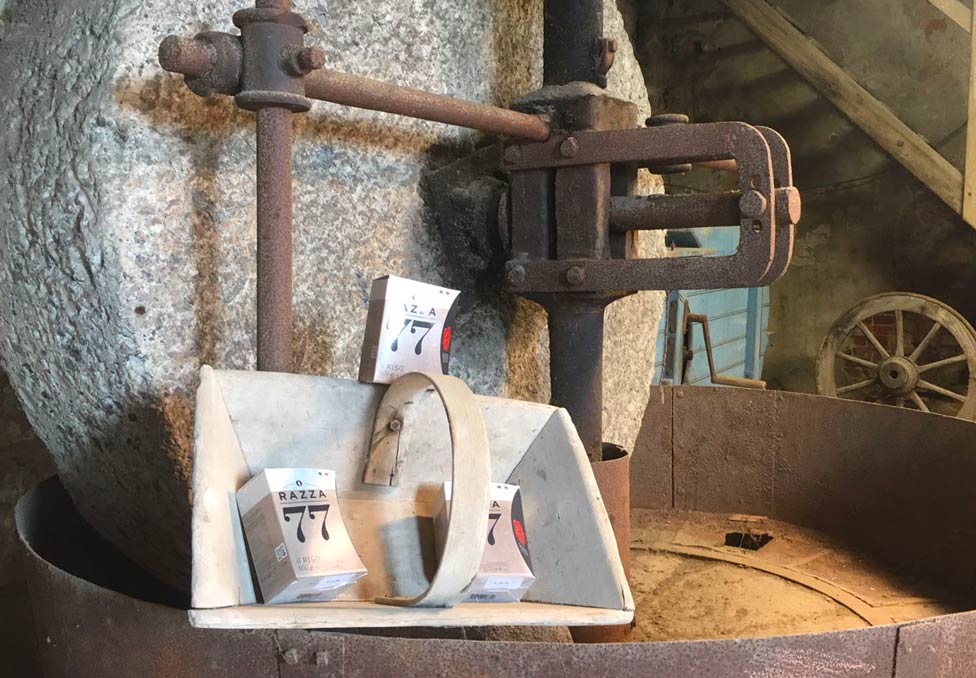 The culture of the rice prompted the opening of the Ethnographic Museum of Tornaco, inaugurated on September 10 of 2005, a section is dedicated to the preparation of rice with a terrace with glass doors, named Il Belvedere del Riso. The reintroduction of Razza77 is registered within the Museum where archives of documents recording its history are kept.

It’s worth considering the words of Angelo Stoppa: "Still today, in spite of the accentuated and pressing aggression of the industry, the world of the Novara Plain becomes incarnate in the rice-field. In that rice culture feeds a great part of humanity. Made of completely natural ingredients and extremely simple the tasty risotto dishes reflect fully the immense love of the land. To be specific on the Novara Plain, Paniscia is more popular than risotto”.

Like a witness of a glorious past, Razza77 wants to incarnate this historical memory of quality as a standard bearer of a territory and of its tradition which is tied to the rice. 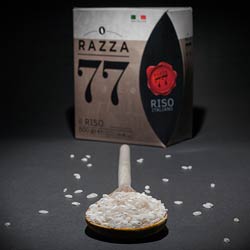